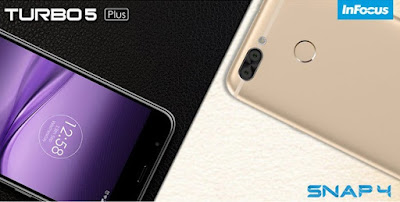 InFocus is all set to launch two new smartphones in India. The company is going to unveil the InFocus Turbo 5 Plus and Snap 4 at an event in New Delhi on September 13. The company has sent out media invites for the same.
Recently, InFocus had launched a new smartphone Turbo 5 back in June and now, this Turbo 5 Plus is the successor of the Turbo 5. InFocus has also tweeted about the upcoming launch along with teasers of both the phones.
The company has revealed a few features about the upcoming InFocus Turbo 5 Plus and Snap 4 through the teasers. Notably, both the phones will sport a dual rear camera setup. Turbo 5 Plus will be backed by a 4,850mAh battery and will feature the fingerprint sensor in the home button. The Snap 4 will feature a metallic body and a fingerprint sensor placed on its back beneath the dual camera setup.
To recall, InFocus launched the Turbo 5 handset in India back in June. The key highlight of the InFocus Turbo 5 is its massive 5,000mAh battery, which the company claims will give you 23 hours of video-calling and 34 days of standby time.
The phone features a 5.2 inch HD (720×1280 pixels) display with 2.5D curved glass and runs on Android 7.0 Nougat with the company’s own InLife 2.1 UI on the top. It is powered by a quad-core MediaTek MT6737 processor. In terms of camera, the device sports a 13MP rear camera with autofocus and LED Flash and a 5MP front camera.
The Turbo 5 comes in two variants, 2GB RAM and 16GB storage (Rs 6,999) and 3GB RAM and 32GB storage (Rs 7,999).