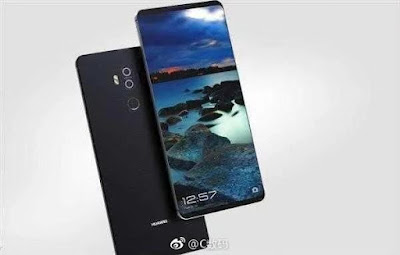 This full-screen display has been confirmed by Huawei, with the firm last month boldly claiming that the upcoming device will “surpass” the iPhone 8 with its bezel-less display.
“The Mate 10 series will surpass Apple’s iPhone 8 as our phone will have much longer battery life, a full-screen display, much faster-charging speed, much better camera and photographic capability, as well as much better overall user experience,” claimed Richard Yu Chengdong, chief executive of Huawei’s consumer business group.
An image of the rear of the device shows off the handset’s dual camera setup (below), which will come with Leica branding and baked-in optical image stabilisation, while an image of its lower edge confirms that it’ll come with a USB-C port. There’s no sign of a 3.5mm headphone jack, hinting that Huawei will ditch it in favour of audio over USB-C.
Elsewhere, the Weibo leak claims that the Huawei Mate 10 will pack Huawei’s Kirin 970 processor – which the firm claims can take on the Snapdragon 835 with its performance and battery life improvements, alongside “at least” 6GB RAM, 64GB storage and microSD expansion up to 256GB.
It’ll run Android 7.0, as opposed to Google’s soon-to-be-released Android O software, and will pack a beefy 4,000mAh battery.
The Mate 10 is expected to cost more than $1,000 (around 64,000 INR) and looks set to launch in October.