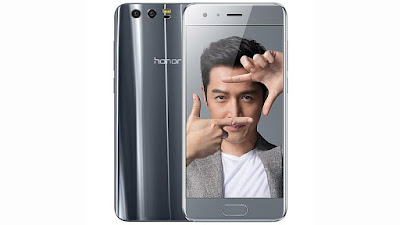 Huawei will be launching the 6 GB variant of Honor 9 in India in August. The company had recently launched it in China  in three variants-  4GB RAM and 64GB for CNY 2,299 (approximately Rs 21,780); 6GB RAM and 64GB  at CNY 2,699 (approximately Rs 25,570); and 6GB RAM and 128GB internal storage, for CNY 2,999 (approximately Rs 28,419).
Allen Wang, Director Product Center, Huawei India said to The Mobile Indian, ” We will be launching our latest smartphone Honor 9 in India by the end of August.”
He further added, “The gap between the China and India launch is due to the customisation we are doing on  Huawei’s Emotion UI (EMUI) 5.1 skin for the Indian users.” He didn’t share any information about the expected pricing but said it would have a competitive price tag.
Huawei is carrying forward the dual camera Legacy in Honor 9 as it did it Honor 6, Honor 6 Plus and Honor 8 series.  It has a combination of 20 megapixel and 12-megapixel cameras. The rear camera has f/2.2 aperture and supports 4K video recording. In the front, an 8-megapixel shooter with f/2.0 aperture has been provided.They rear cameras support face detection, HDR, panorama, phase detection autofocus, Geo-tagging and touch focus.
It has a 5.15-inch full HD (1920 x 1080 pixels) 2.5D curved glass display. It is powered by a 2.4GHz octa-core Kirin 960 processor backed by Mali G71 MP8 GPU and 4GB/6GB RAM. Besides, 64GB/128GB of internal storage, the Honor 9 comes with an optional storage via micro SD card. The smartphone runs on Android 7.0 Nougat operating system and comes with  EMUI 5.1 on top if it.  It has a 3200 mAh battery with fast charging support.
Like most of the smartphones available in the market, Honor 9 also comes with a fingerprint scanner which is placed on the front panel and is embedded into the home button. It has USB Type-C port and an Infrared sensor as well. Besides, the smartphone has a Hybrid Dual SIM tray, 4G LTE with VoLTE, WiFi (a/b/g/n/ac), Bluetooth 4.2, GPS, 3.5mm headphone jack and NFC. The handset measures 147.3 x 70.9 x 7.45 mm and weighs 155 grams.